They say a picture can be worth a thousand words so here in one cartoon is exactly what a Biden White house would look like: 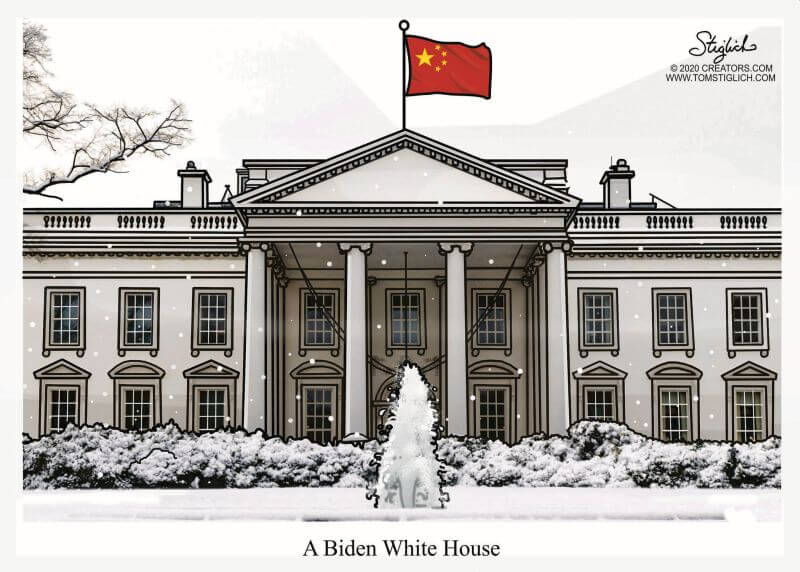 Does that sadly about sum it up?

A Biden White House would be a puppet of China gleefully participating in the suicide of the west.

In fact it’s not too much of a stretch to think we are living in what is fast becoming a banana republic:

President Trump Questions The Motives Of The FBI, DOJ Over Hunter Biden Investigation by Marmee Rooke

President Trump’s favorite avenue to communicate directly to the American people is undoubtedly, Twitter. With all of the platform’s problems, the ability to hear from the President directly brings millions of conservatives to the digital town square.

It was no surprise that it was Twitter’s digital town square where President Trump chose to voice his concerns over how the DOJ and the FBI handled the information surround the investigation into Hunter Biden.

Newsmax reports that “President Donal Trump is blasting the FBI and the Department of Justice, along with the media, over the news that Joe Biden’s son Hunter is under federal investigation, demanding to know why the probe wasn’t announced before the November election.”

President Trump tweeted, asking “why?” the “fake new media, the FBI and the DOJ” failed to report on the Hunter Biden investigation “BEFORE the Election.” President Trump then claimed again to have “won the Election anyway,” saying that he received “75,000,000 VOTES!!!”

The tweeting continued with President Trump accusing A.G. Barr of knowing “of the corruption during the impeachment hoax” that revolved around a “phone call to the President of Ukraine.” President Trump again described his phone call with the Ukrainian President as a “perfect” call.

The Hunter Biden investigation information was leaked this week. It was reported that the investigation into Hunter Biden’s business deals has been going on since 2018, long before the impeachment sham began. President Trump’s administration has been marred with staffing failures who refused – either covertly or publicly – to follow the mission of his presidency. Now, President Trump fears that A.G. Barr is the latest in the line of failures after allowing the “impeachment hoax” while seemingly covering for the other political candidate.

Ted Cruz reacts to viral video of family kicked off plane “In what universe does this make any sense?”