California is experiencing massive problems as a result of decisions made by the state’s governor Gavin “Gruesome” Newsom.

To make matters worse, high earners are also fleeing the state’s restrictive and high tax policies and taking their tax dollars with them.

They say a picture can be worth a thousand words so here is the sad truth about the once ‘golden state’ and the destruction caused by its progressive governor: 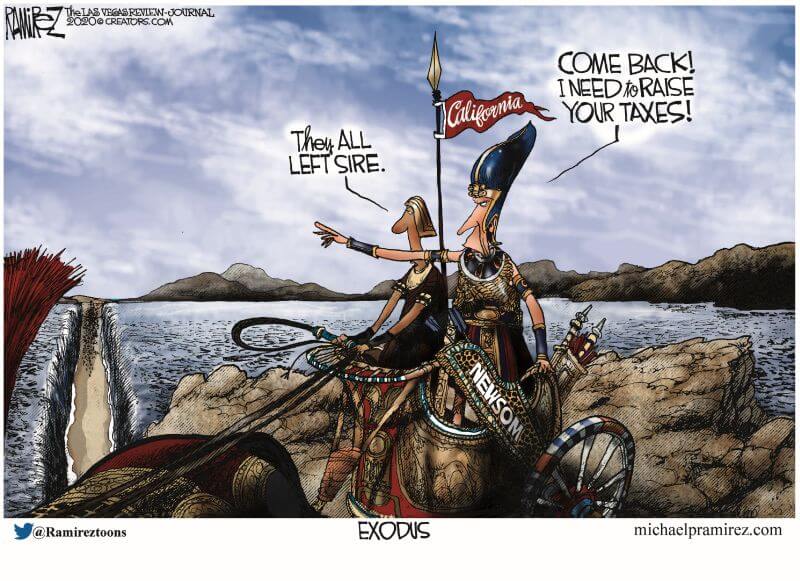 If Newsom does not quickly change course everyone who can flee the state will do so.

As bad as things are in California there are signs that a rebellion may be brewing, and it may all start with law enforcement.

California Sheriffs Band Together In The Name Of Freedom, Refuse To Enforce Newsom’s Lockdown by Ryan Ledendecker

Police officers around the country — and especially in California where crime is on the uptick — have much higher priorities than bothering with enforcing draconian, COVID-19 lockdown measures ordered by power-hungry, Democrat governors.

According to the Washington Free Beacon, the latest group of law enforcement professionals to send that very message is a group of sheriffs in California who have made clear that they have zero intentions of ruining people’s lives because they failed to wear their mask in between bites of food or had too many people over to their house on Thanksgiving.

“We’re not going to make criminals of normally law-abiding citizens,” Fresno County sheriff Margaret Mims stated, along with several other sheriffs across the state who understand that Gov. Gavin Newsom’s lockdown orders are a clear violation of American freedom.

Sheriff Mims couldn’t have made the argument any more clearer, as she said police officers have more important things to do, like “taking guns away from gang members, stopping narcotic trafficking, and saving children from internet predators.”

Sacramento County sheriff Scott Jones echoed Mims’ statement, adding that his department would not partake in stringing up law-abiding citizens over wearing masks or breaking the recommended guidelines of how many guests are allowed in a home for certain occasions.

The sheriffs made clear of their intentions right as Newsom — who was caught breaking his own COVID-19 mitigation rules last week — announced a strict, new lockdown measure with the hopes of curbing the spread of COVID-19.

In response to Newsom’s insanely strict new rules, which include a curfew for much of the state that prohibits nonessential people from being outside during certain hours, thousands of Californians took to the streets in protest, according to Fox News.

Protesters Take to the Streets to Protest New Curfew in California https://t.co/pcNYfiJ50w via @BonginoReport pic.twitter.com/VXoJg2Fj2j

Even Los Angeles Mayor Eric Garcetti felt the wrath of the freedom-loving Californians, who staged a “Curfew Protest Block Party: No More Lockdown” protest outside of his residence over the weekend.

At this point, the restrictions are expected to remain in place for three weeks. It’s no surprise that people are already protesting the new lockdown within hours of it taking effect, as these same people experienced the first round of lockdowns earlier this year with promises made that it would help “flatten the curve” — promises that failed to come to fruition.

With many in local law enforcement refusing to enforce the strict lockdown measures, there really isn’t a point to implementing such measures at all. Sure, some people will blindly follow them, but to punish small business owners and others who depend on local, thriving economies, is completely unfair and a waste of time.

NY Woman Could Spend 25 Years in Jail on Gun Charges