CNN smears Melania Trump for taking off her mask at hospital, then REFUSES to correct misreporting when proven WRONG

CNN smeared Melania Trump today for taking off her mask at a Children’s hospital while she read a book, claiming she ‘broke’ the hospital’s mask policies:

Trump, who has visited children at the hospital each year during her time as first lady, continued the tradition despite the coronavirus pandemic and record cases in Washington, DC.

The first lady arrived in the hospital’s main atrium wearing a mask. When she took her seat in front of a tree, she removed the mask. Though she practiced social distancing, the hospital’s policy specifically requires all visitors to wear a mask.

“Everyone must wear a mask at all times while in any Children’s National facility to prevent the spread of COVID-19,” the hospital’s policy says.

That includes “wearing a mask when entering any Children’s National building, as mandated by area officials. This includes all public places, such as the hallway and cafeteria,” and “wearing a mask at all times when you are around other individuals.”

The first lady’s office did not immediately respond to CNN’s request for comment on why she removed her mask and whether she got special permission to do so.

Here’s video of the incident from The Hill, who also spread this around today:

Stephanie Grisham did respond, however, by tweeting a few minutes ago that Melania broke no hospital mask policies and even tweeted a statement from the hospital explaining their policy: 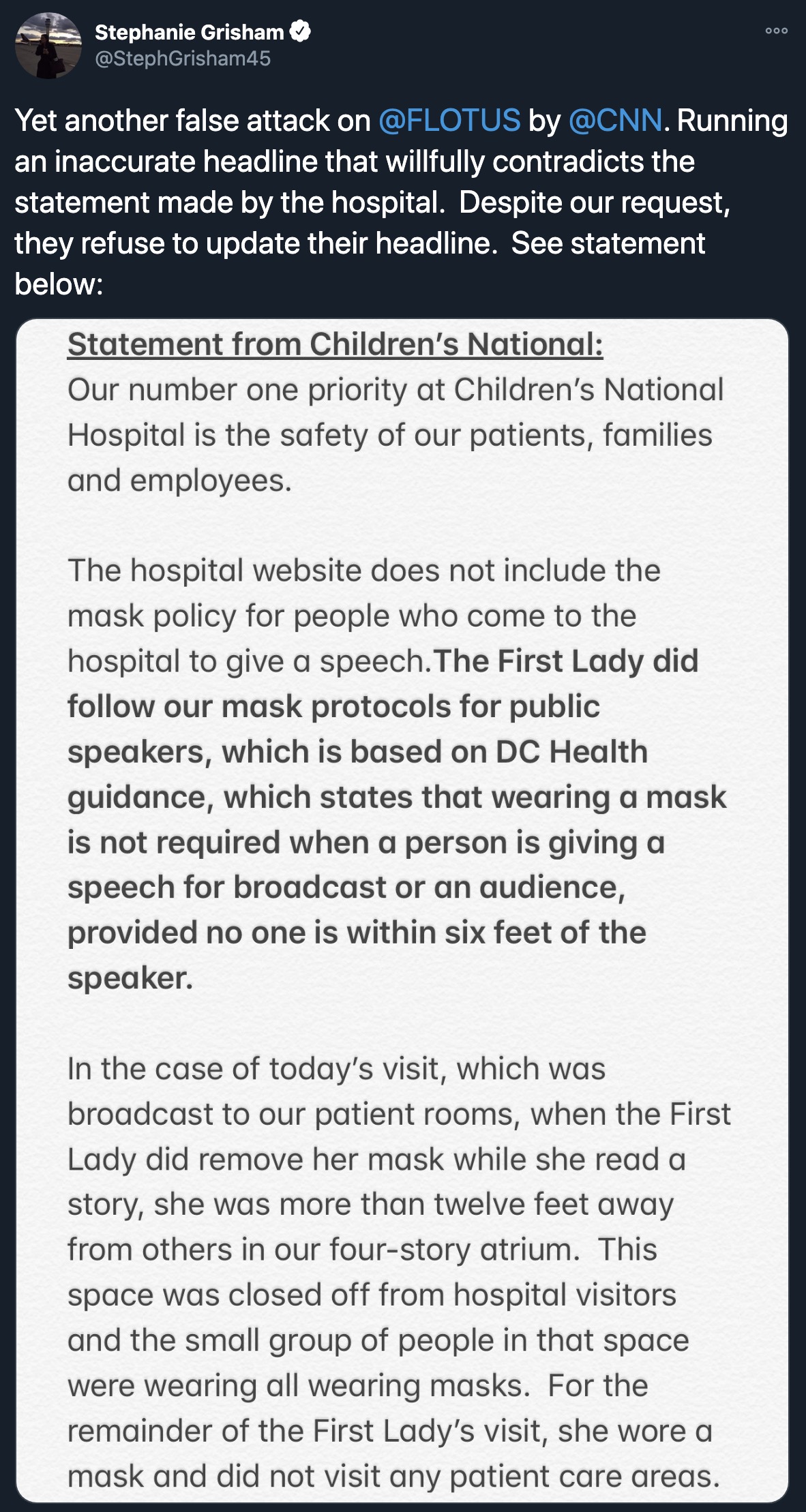 The hospital clearly stated that Melania did follow their mask protocols for public speakers, which they say is NOT on the website. But instead of asking first, CNN’s Betsy Klein rushed to the keyboard to publish this garbage.

Note that in the tweet, Grisham says “Yet another false attack on @FLOTUS by @CNN. Running an inaccurate headline that willfully contradicts the statement made by the hospital. Despite our request, they refuse to update their headline.”

It’s true, they do refuse to update their headline or their reporting. They’ve even added the statement from the hospital on the bottom half of the article (which most won’t read), but refuse to change their false headline and false reporting in the top half (which most will read). I can attest to this because the snippet I posted above came after they added the statement from the hospital.

So much for calling a banana a banana. Well, that ship sailed years ago.

House Republican plans to OBJECT to specific electoral votes in January, calls on any Senator to stand with him!